The following figure depicts the theoretical model used to develop the PREP-C: 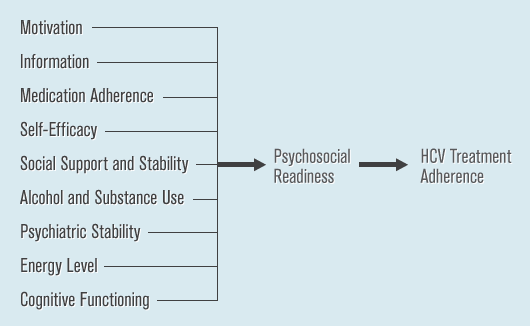 The PREP-C was administered to 50 patients in 2011 being evaluated for HCV treatment at primary-care based liver clinic and HIV Clinic.

The patients are 50% male; 46% Hispanic, 42% black, 12% white; 30% HIV-co-infected. A clinically derived scoring algorithm (the same as used to provide feedback on this web site) was used to rate the completed interviews on each of the 9 areas of psychosocial functioning. The median number of areas on which patients receive a rating of ‘Satisfactory’ is 5 (range = 1-8). The number of domains rated ‘Satisfactory’ does not differ by sex, HIV status, or race/ethnicity. The Chart below shows the distribution of Satisfactory ratings in each of the 9 areas of psychosocial functioning. Patients are most frequently rated Satisfactory in the Motivation domain and least frequently in the Information domain. 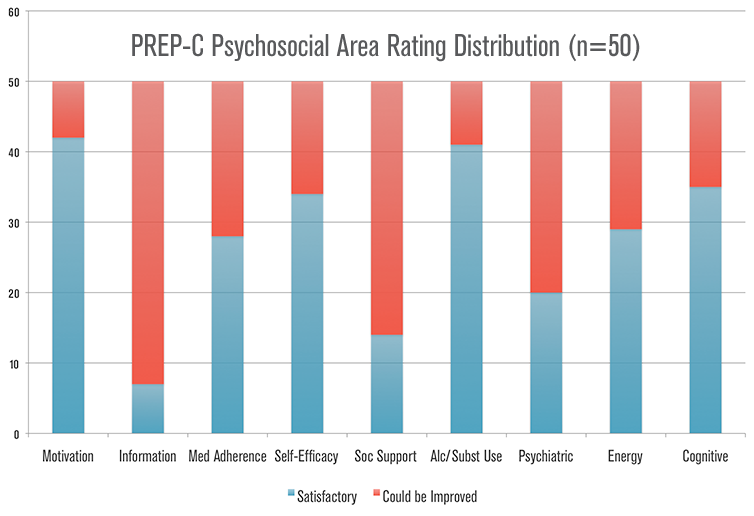 The charts of the 50 patients were examined 9 months after the administration of the PREP-C to determine how many of the patients had initiated HCV treatment. Half of the patients (25/50) had started treatment by nine months after the PREP-C interview was conducted. The data was analyzed to see if gender, HIV status, race/ethnicity is related to beginning HCV treatment within nine months and found that they are not (see Table below):

We examined whether having been rated Satisfactory or not on each of the 9 areas of psychosocial functioning is related to having started HCV treatment in the subsequent nine months and found that this is not the case for any of the specific areas (see Table below):

The preliminary data presented is limited by the small sample size. The data that is collected via this web site will be used to conduct validation studies on a larger, more diverse patient sample. The data will be used to refine the clinically derived algorithm used on this web site to rate areas of psychosocial functioning as Satisfactory or Could be Improved.